One of the most popular sex toy companies has produced one of the most unusual masturbators ever. This Fleshlight Alien Pussy review will let you know how it is different.

Just a few things about the company Fleshlight, it is one of the pioneers of male sex toys, it is in partnership with other brands because of their amazing sex toys that can arouse anyone.

Fleshlight was first known because of their basic masturbators that come in plastic with simple sleeves made out of silicone to recreate or mimic the texture of a vagina or a person’s mouth.

Now that sex toys are evolving; the simple rubber is not selling anymore. People demand something either smart or unique when they use it to get the impression of other people.

Now that we are talking about people, users also get tired of that. Some find other unusual forms of sex toys more entertaining because of the different experiences they get.

The Alien Pussy from Fleshlight is as it sounds. I hate to say that it is out of this world because many reviews might have used that phrase, and I think unique is a more fitting word. 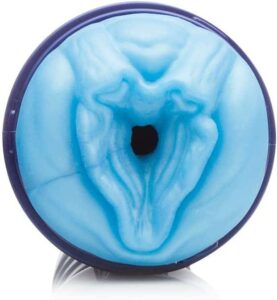 Unique is not an understatement, nor is it overwhelming praise to this sex toy. It is the definition of this sex toy as it does have different textures, but it also stuck with some familiar ones.

So in case you are tired of the usual mouth or vagina mimicry from sex toys, you should consider buying this alien pussy. This will give you a weird-at-first experience but great at the end.

This review will let you know everything about the Alien Pussy and how it feels when used. It is unusual, so bear with me and keep on reading to know what exactly you should expect.

What Is The Fleshlight Alien?

It is exactly what you think of. This Alien Pussy from Fleshlight follows the standard skin-like sleeve when it comes to the texture, but it is different in terms of design and looks.

This sex toy has great ergonomics like any other Fleshlight masturbator. However, some people might find it weird that it does not look like an ordinary vagina; yes, it does look deformed.

The main point here is that the company made the Alien have two sets of the clitoris on one sex toy. It is only made more alien-like by coloring it with a pearly blue silicone color.

I just found it a bit funny and coincidental that this sex toy was made popular right after the confirmation of the new Avatar 2 movie’s release as it fits the description.

So maybe when you watch the movie in the comforts of your room, you can imagine having sex with one of the characters while using the Fleshlight Alien Pussy.

When you first use the Fleshlight Alien Pussy, you might find it weird that it has a different front. However, aside from the design, this sex toy is not far from the other Fleshlight sex toys.

The double-clitoris design of the sleeve gives it a unique yet satisfying look. The sleeves that you are used to from other sex companies are sometimes tight on the entrance.

The unique design of this sex toy allows easy penetration as it has a wider triangular opening. This way, you can easily use the Alien pussy if you have a wider girth than the average.

It does not mean that it removes the sensation as the wide opening is still tight enough to feel the penetration. It is just wider than most sex toys in the market right now.

If you cut the sleeves crosswise, you will see the familiar spiral right after the insertion point. The cross-section of this sex toy is familiar to any Fleshlight user in terms of the texture. 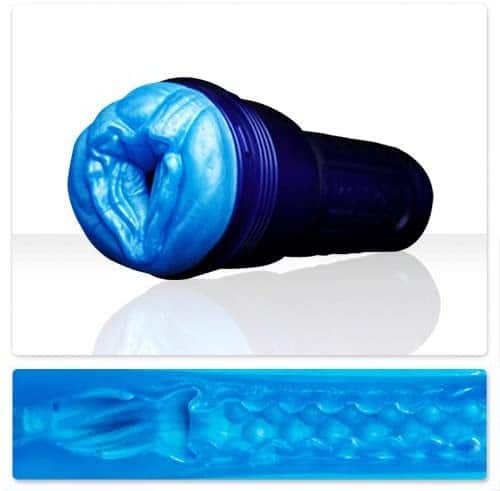 So as we have said, this Fleshlight Alien sex toy is a very familiar one. The first thing that your penis will encounter will be the spiraling chamber that mimics the walls of the vagina.

The spiraling ridges will give you a great sensation. You will feel the second texture where your penis is pressed in by two different rings to mimic the structure of the vagina.

This sex toy’s sleeves imitate the point where the penis sometimes stops because of a much smaller opening. This way, your penis is stimulated on the shaft and the head.

Once your penis penetrates that small opening, you will get to the third and last texture. This texture is found on the back of the sex toy and covers about 60% of the sleeve length.

This is where you will feel the ridges or, rather, bumps that give your penis that familiar sensation. The raised bumps help in stimulating both the head and the top of the penis shaft.

How It Feels Using The Fleshlight Alien Pussy

I have to admit; the Fleshlight Alien Pussy did feel a little loose on its entrance. The wide entry point did not give much sensation, but it is a whole new experience once inside.

The spiraling ridged wales gave sensations and stimulations from all sides. My penis’s head was really stimulated, so I forgot about the loose entrance almost immediately.

The next tight entrance after the spirals also gives a more realistic vaginal opening. It slides tightly, and the wide opening after it gives it the popping sensation, which is perfect.

In my personal experience, the Alien Pussy did a great job, especially on the part where there are some bumps. However, I discovered something that stimulates you the best.

If you reach the lotus node where there is a tight entrance with a wide opening at its back, you will enjoy it most if you repeatedly go in and out of it before going deeper.

That is for stimulation and if you want to finish it off, make sure always to keep your penis pressed on the bumps to stimulate the head and shaft of the penis with varying textures.

Perhaps the easiest masturbator to clean, the Fleshlight Alien is like other models. However, it does have a tricky part since it involves three different textures inside it.

These textures felt great when using it as it traps the lube in three different areas. However, it is not as fun when it comes to cleaning as it is a bit hard to remove it just by washing it down with water.

It is also almost impossible to flip the sex toy inside out. So what you need to do is use a thin but long brush to remove residues inside the sex toy and wash it with water only.

The silicone sleeve does not necessarily absorb soap or other chemicals but the spiral ridges, nodes, and bumps might get the chemicals stuck inside the sex toy.

So as much as possible, make sure to use only warm water when cleaning the Alien Pussy. You can also follow the guide to cleaning it that comes with the product.

Fleshlight has been one of the best-selling companies in the sex toy industry. They have dominated the niche by partnering with other giant companies for the best sex toys.

Their own designs are also used as patents for other sex toys. However, the Alien Pussy is unlike any other, and it is yet to prove its dominance in the sex toy industry.

However, its uniqueness is also what makes it great. It gives three different sensations in one insertion, and the weird design is somehow appealing in a sense.

I mean, yes, it is different and weird at first, but if you look at it, it does look familiar. Besides, you are not going to look at it while you insert your penis into it.

So if you want something a little bit different yet familiar when it comes to the sensation. The Fleshlight Alien Pussy is the perfect masturbator for you.