This We-Vibe Nova 2 Review is a bit of a mixture between the features, upgrades, and personal experience with the sex toy so if you want to know more, read on.

There have been a lot of developed sex toys on the market for the past years so we are not surprised if you are having a hard time choosing which toy you should purchase.

Female sex toys have been around for a long and now, more and more ale users are indulging the different yet good sensations that sex toys bring to your sex life.

The Nova 2 is an upgraded sex toy based on the original Nova. It did not change much in terms of the appearance but it does have small details that put so much difference to the feel of it.

This sex toy can bring you and your partner pleasure that you will never experience with other sex toys. Aside from that, it also gives you enough pleasure when using it by yourself.

So if you want something to entertain you during your break time, then you should read on as we give you a full review of the We-Vibe Nova 2 with all the details that you need.

As mentioned before, the design of the Nova 2 did not change that much compared to the original Nova. However, with small changes, the experience with the Nova 2 is now better.

The original Nova had two colors that made the sex toy not that appealing. The new Nova 2 has a monochromatic design which not only adds to the aesthetics but also with hygiene.

See, the dual colors of the first Nova meant that there had to be a gap between the colors. That small gap tends to get dust and gunk that makes the sex toy dirty when the dirt builds up.

With the new overall coating of the Nova 2, you get rid of that groove and so the sex toy stays clean and can actually be cleaned easier just by washing it with water or wiping it down.

Now to the different specifications that are in this very simple and unassuming toy. It contains more than what it actually shows which makes the surprise even better with this sex toy.

Perhaps one of the most common problems with dual-stimulating vibrators is the weak clitoris stimulator. It does not vibrate as much as the insertable part of the sex toy.

With the Nova 2, you have two motors within the sex toy that powers two different parts. One motor is responsible for the vibrations you feel inside you to stimulate the G-spot.

This eliminates the problem of having weak vibrations on either stimulator, when you use it, you can feel all the vibrations that you need in order to get to the climax. 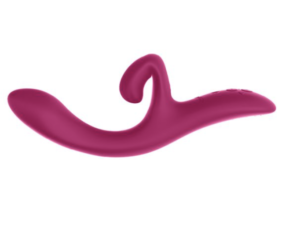 Most dual-stimulating vibrators also have this problem. They make universal designs and assume that all clitoris is found on the same spot in terms of length.

However, that is not the case, so some people have an outer stimulator too near or too far from the clitoris. This makes the clitoris stimulator virtually useless.

We-Vibe made the clitoris stimulator of the Nova 2 a bit longer. They also put a bendable and adjustable feature inside that lets you point the stimulator right on the spot where you want it.

As if that was not enough, they also made an adjustable internal arm available for the stimulator inside so you can also adjust that according to the spot that you want to be stimulated.

This way, you do not have to wait for long periods of time of charging before you can use the sex toy. You will also be finished with it before it even gets to half of the battery power.

How To Use The We-Vibe Nova 2

We-Vibe is known for its accurately-controlled sex toys and the Nova 2 is no different. So here are the different ways where you can use the new and improved We-Vibe Nova 2.

The buttons, instead of being flat, are now protruding from the handle which means that you do not have to stop down and look for the buttons, just use the sensation to find the right button.

One common problem here is that in order to select the vibration that you want, you have to press one button and if you missed it, you need to go back around to look for it again.

One thing you cannot do with these buttons is changing the speed on the individual motors. Yes, they can run at the same time but the patterns of the vibrations will be the same.

This is a common controller for any We-Vibe sex toy. The app is available and free in both Android and Apple app stores so go download it right now.

One amazing feature of the We-Connect app is dual control. Once you open the app, you will see a split-screen where you can control the vibrations of the motors individually.

The app also allows you to create your own pattern. I find this especially useful for people who have partners so the sex toy can add a little bit of a surprise element.

We-Vibe Nova 2 is an exceptional sex toy. It felt great inside and the adjustable stimulators really have an impact to make the experience even better.

Personally, I prefer using the We-Connect option for the controls since it can let you control the vibrations of the stimulators independently which gives a more stimulating effect.

This sex toy is also waterproof so washing it directly under running water is not a problem. Wiping it with wet towels will also do but it might need more than that.

If you are looking for something that will stimulate both the inside of the vagina and the clitoris with precision, then you should definitely get the We-Vibe Nova 2.

If you like what you read about this sex toy then do share it with your girl friends on social media!